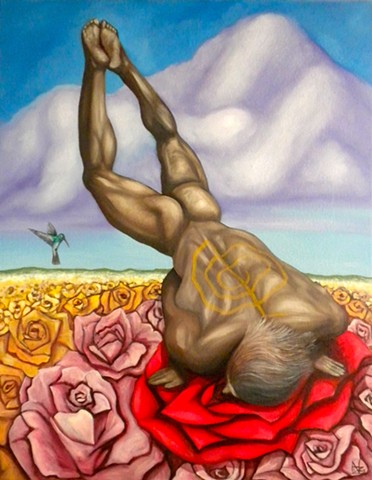 Here the male figure seems to have fallen out of the sky as if a 'bolt'. On his back in gold the reiki symbol of the 'cho-ku-rei', is a manifestation of the focused power of the universe illuminating our 'presence' like an ‘invocation...... a prayer for divine femme.

He may even represent an 'exclamation point', a visual response to the haiku like poem 'La exclamacion' by Octavio Paz, which evokes the sudden appearence of a hummingbird.

"Stllness, Not on a branch, In the air, Not in the air, In the moment, Hummingbird"

The earth covered in varioius coloured roses has at the core a red rose from which a 'labyrinth' of roses seem to ripple out. The sacred geometric nature of this pattern may allude to the ‘flower of life’, a resonate scent within the Gaia matrix of a pulsating bio-energetic akashic 'Earth Mother/Yoni'.

The rose earth as 'mortar' meeting the sudden 'male bolt' eludes to the 'heiros gamos' vortex of the sacred union of the male/female, further suggested within the cloud formation (Plume) in the painting.