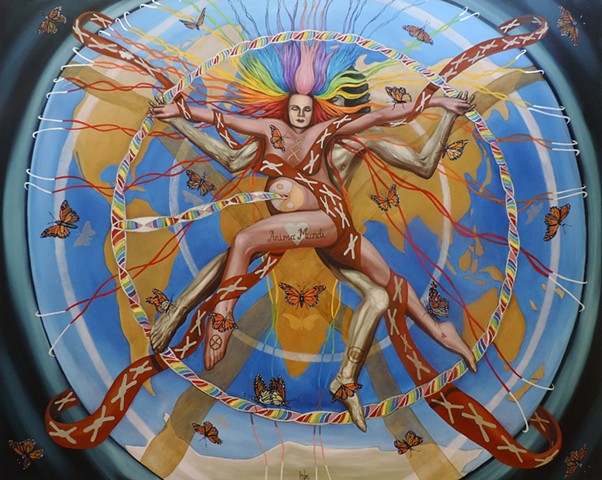 The ‘soul of the earth’ or anima mundi forms the inspiration for this painting. Conceived around a pregnant female figure being supported in space by the male, the figures converge to form a dynamic star like appearance. This pattern alludes to earlier works exploring the notion of the MerKaBa, (Light –Spirit – Body) as a meditation on the earth/sky paradigm. It also evokes a kind of sacred mandala or lens given the circle within circle shapes that ebb and flow within the pictorial frame.

The couple seem to be held in space by a pattern of strands, forming a matrix of multi-dimensional circuits flowing around the disc like orb. The two large strands (red earth ochre) weave around the bodies create an X, casting a golden shadow across the map of the world motif. The suggestion here is in reference to the X-chromosome, seen as pattern painted upon the strands.

DNA strands derived from chromosomes have been evoked by the placenta like circle that has emerged from the navel of the female figure. Upon her belly a golden/silver yin/yang symbol reflects the duality of gender and creation. The seven colors within the double helix configuration of the circle, also form the strands of hair for the woman. The colors evoke the chakra’s accordingly with each hair strand tapering into a double helix. The ends of these strands painted in silver refer to the telomere’s found at the tips of DNA.

The painting considers various perceptions with respect to a co-creative partnership needed to support the spirit of Gaia, and continues the narrative expressed within the painting ‘Femme- Women Healing The World’. That painting depicted a circle of women creating a vortex of the hearts magnetic field. Anima Mundi has emerged from Femme and explores the very nature of pre-natal creation found within the atomic components of life that manifest to evolve and express our Light Body Spirit. In Femme, actress, author, activist, Celeste Yarnall awakens our thoughts to the importance of downloading harmonic impulses into the unborn fetus. Very much like butterflies humans embody imaginal cells that can determine a transformative healing bio-energetic reality within the poetic discourse of Gaia theory and human nature.