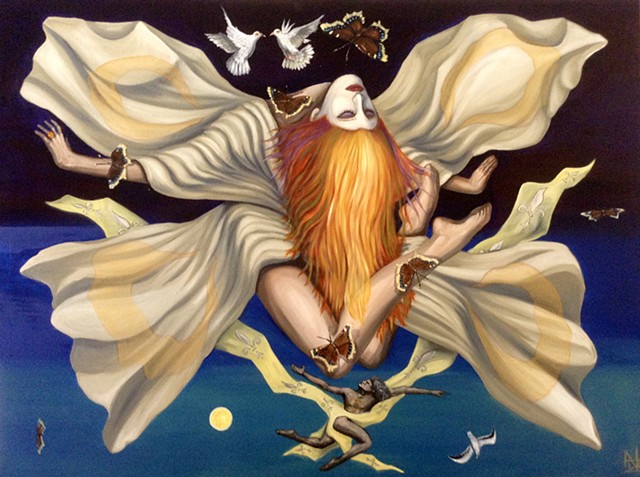 The Genesis of this painting is formed from multi-dimensional inspiartional impulses that converged during the evolution of the work. Following my painting of the 'Butterfly Nebula' (Apotheosis) I felt an emotional surge of a draped figure floating in space that naturally assumed the flutter and shape of a butterfly. Within the peripheral reality of observation the 'Mourning Cloak Butterfly' entered my vision and placed its resonant glory to the painting in color and symbol. Wim Wender's Film on Pina Bausch also seemed to ignite a metaphoric flux and allegory of fusion found in the themes of the sacred feminine/masculine paradigm shifts that annouced a Celestial force of intention and expressive modality, as reflected by the fleur de lis motif on the drapery of the male Sun figure in adoration of the female lunar goddess whose garb is embellished with crescent moons. The female figure displays the Kathleen McGowan ring on her left hand, placed to honor a deeply profound emotional unity present within the labyrinth of emotional raptures and spirals flowing amid transcendental thermals atuned to inter-dimensional poetics and frequency.