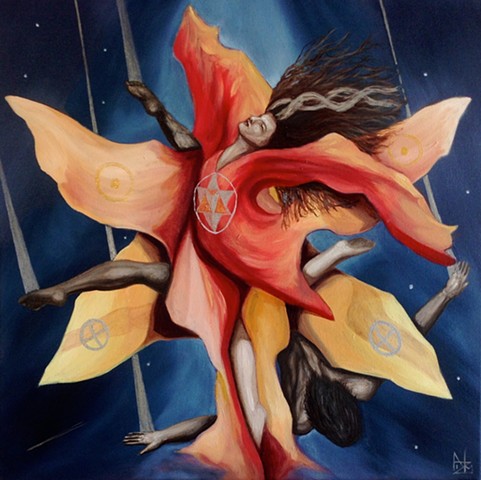 This painting was inspired by the August Perseid Meteor Shower 2013, withnessed in Joshua Tree, California. Being part of the Contact in The Desert event, a MerKaBa Meditation was presented during the star gazing, manifesting a Star Tetrahedron within the conscious state of observation seen at the heart of the painting and echoed in the shape around the figures. Within the flowing drapery the astro symbols of the Sun and Earth have been ascribed suggesting the sacred male female paradigm of awareness imagined by the poetic metaphysics of the shooting stars. The counter balance of the acendent female form whose hair has the DNA helix weave, juxtoposed by the male cascade with golden beams, alludes to the formation of the tetrahedron mediation matrix. The Mer (Light) Ka (Spirit) Ba (Body) adds to my ongoing explorations of Celestial bodies as expressive portals of being