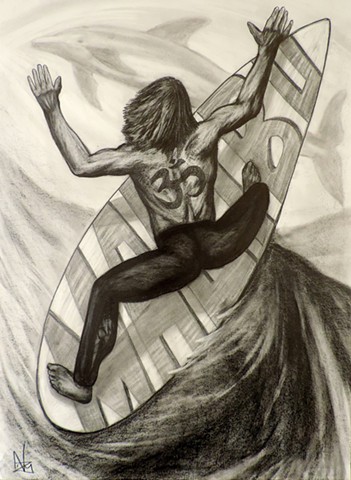 This drawing in graphite is a study into the mystical nature of a surfer, intune to the elemental 'Oneness' generated by the ritual of riding a wave on a board. Inspired by observing the surfing culture of Malibu in California, the idea of being at one with the surf as a 'spiritual' allergory became apparent. Also having seen dolphins occassionally appear within the waves, brought about the notion of a mystical dimension when juxtoposing the ultimate surfer (dolphin) with that of man. The OM Rider can be considered as a shamanic figure somewhat, existing within the existential mercurial context of being and becoming.....a moment captured in the flux of wave, dance and sonar echo, as a kind of visual vesper.