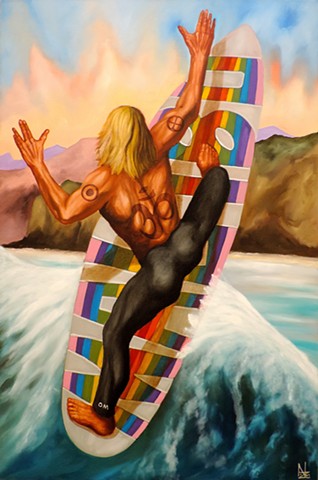 This painting follows the graphite study of the OM Rider (Malibu) drawing. The similarity of the dynamic stance of the surfer on the board is intended to evoke the ecstatic state of the figure riding the wave. With the 'OM" symbol tattooed on his back, the sun-kissed form suggests an elated dance, yet the gesture of his left hand depicts the 'Live Long & Prosper' icon derived from the TV series Star Trek.

The juxtoposition of the surfer with Star Trek iconography eludes to the personal facets that were present during the paintings evolution, as well as the Zen like motivation that inspires the surfer on his existential quest, to boldy go were no surfer has gone before, in an act of creative discovery, of a poetic reality that resounds with the 'Oneness' of accord and harmony. The Malibu inscription upon the board, further suggests through the colors of the 'chakra's', the symbolic teleportation of being beamed into another dimension, as is often the case in surfer philosophies and shamanic states that embrace the elemental vortex of nature's flux.

The artist's actress wife Celeste Yarnall who appeared as a guest star on a Classic episode of Star Trek called 'The Apple' and who is jouneying through her cancer recovery, refects this most profoundly as she rides the waves of healing into the state of well being.