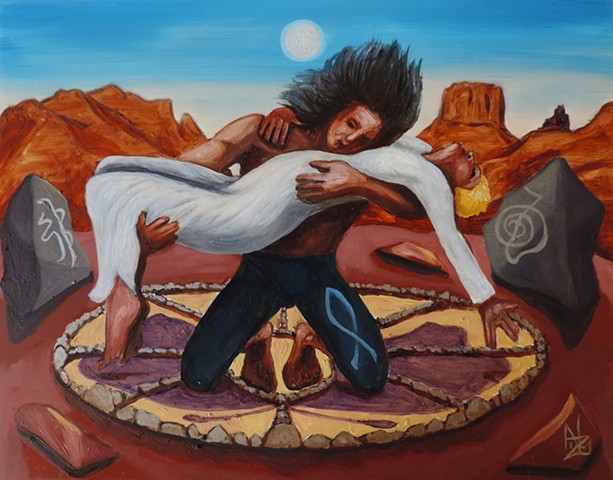 Painting sketch inspired by the symbol of the Medicine Wheel. Recollecting a time spent in Sedona (Arizona), where the healing energy vortexes that exist within the iron oxide rich red terrain, manifests a deep sense of Nature's Power. The figures within the stone medicine wheel set within the red rock vista, alludes to the sense of a life-supporting matrix, where the female figure being held by the male represents the duality of existence enchanced by the energy field of healing transformation. The butterfly shadow cast by the figures within the wheel evokes the metamorphosis of this reality. Being a Star Trek actress one can also see the Live Long & Prosper gesture expressed by the feminine form. The work is a personal reflection in part to the journey that the artist and his beloved partner had to endure when the diagnoisis of stage three ovarian cancer was revealed. Upon the pant of the male figure the teal ribbion of Ovarian Cancer Awareness can be noted. The two rocks on either side of the medicine wheel, also bare in silver (lunar healing),the Reilki symbols of the Sei He Ki on the left (protection symbol) and the Choku Rei (power symbol) on the right. The cathartic essence of the image is profoundly evoked within the choreography of the composition.