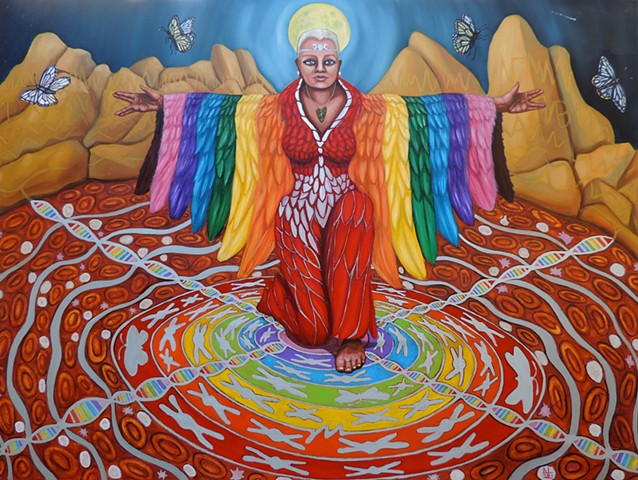 “Thought is an Organised field of Energy, composed of complex Patterns of Vibrations which consolidate Information” Valerie V Hart.

The core impetus for this painting is based upon the Bio-Energy healing matrix of the Medicine Wheel. Here the concerns of the Physical, Chemical and Biological are given Poetic accord and Meta/Mystical consideration. The image follows on from the painting Femme – Women Healing The World, Inspired by the film documentary created by Emmanuel Iter and produced by Celeste Yarnall & Nazim Artist.

Continuing the theme of Humanitarian Documentaries by Iter, exploring various themes including The Cure, a look into Integrative Holistic Paradigms within the health practices of the Globe, gives preface to the painting of the Triple Goddess.

The Wheel as a Heart Symbol/System evoking the Alchemy of the Four Directions, Four Chambers (of the heart), Four Elements and the Wave patterns of Brain activity or Consciousness within the Universal field of Perception, can be seen as pivotal motifs throughout the image.

In the Femme painting the pictorial harmonics of the Circle, formed by the group of women linked together arm in arm, evoked the circle within circle composition of the work. The colours used in the Femme picture are carried into the Triple Goddess as well, employing the chakra spectrum as a focal value.

Also apparent are the symbols and signs that refer to Chromosomes, Double Helix DNA strands, and butterflies, as the transformative themes that motivate the paintings. Other pictorial elements such as red/white blood cells, platelets and brain wave charts, embellish the space around the Goddess Figure, creating a suggested Bio-Energetic field of currents and flow rhythms painted in silver & gold to imply a kinetic effect when observing the painting.

“The Truth that we can heal, we must learn again. Medicine is in our Hearts and also in the Heart of that which we call the Universe”. Nikola Tesla

The mantra here offers a profoundly resonant impulse within the painting. The Celestial syntax depicting the Goddess of the Triple Moon reflects the life cycle evolution of a Gaia icon, embodied by the artist’s wife Celeste Yarnall. Celeste who was immortalised as a guest star on the original TV series Star Trek (The Apple), has been transformed into the Goddess of Frequency, Flux & Flow.

Kneeling within the medicine wheel, her feathered shamanic garb synced to the seven spectral colours (Chakra/Rainbow) of the circulating galaxy beneath her feet, her arms outstretched, as if an exotic bird which has landed or about to take flight. On her head the crown of the Triple Moon symbol of her feminine goddess nature, as with the bloodstone necklace evoking the cyclical plasma of menstrual flow, fertility and creation.

A traveller whose terrestrial trek communicating the Live Long & Prosper adage, ‘hailing frequency’ of healing modalities she now shares with those with eyes to see & ears to listen. The fluttering butterflies allude to the hearts imaginal cells in flight into the four directions having emerged from the dynamic electro-magnetic medicine wheel as oscillating white crystalline vessels of Mind, Body, Spirit & Energy. Hovering over the shape shifting rock background (Joshua Tree National park), the insects symbolise the cellular rebirth of our Light & Being as comets of teleportation.

“What we have called matter is energy, whose vibration has been so lowered as to be perceptive to the senses”. Bruce Lipton

Celeste whose journey from Stage 3 Ovarian Cancer diagnosis in November 2014 to being in remission a year later, deeply affected the creative surge and conceptual framework for the picture. Now as a Passionate advocate within the Holistic Cancer Care movement she is using her public presence to convey vital life affirming protocols to raise Ovarian Cancer Awareness. Of these protocols she is a champion of the BEMER device, whose effect on enhancing general blood flow, has been a crucial in her recovery.

In the painting the BEMER signal, a patented multi-dimensional wave pattern is acknowledged with its unique form. This along with reference to brain wave signals ranging from Gamma, Beta, Alpha, Theta & Delta, add an abstract weave that amplifies the sense of a Bio-Energetic accord composed within our entangled Quantum Oneness.

“To understand the secrets of the Universe, Think in terms of Energy, Frequency & Vibration”. Nikola Tesla