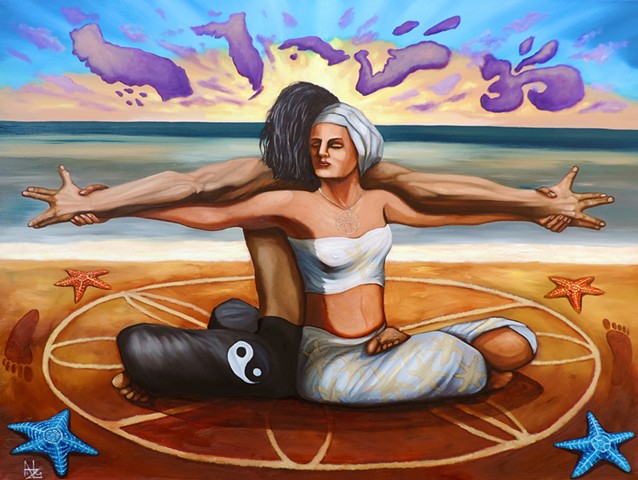 Inspired by the Native American notion of the medicine wheel, representing a spiritual belief system based upon the sacred geometrics of the 'circle', embodying ideas of infinity, rebirth and motion bound to the 'oneness' of everything, offered a deep emotional connection to the journey of the artist's twin flame beloved Celeste Yarnall through her ordeal with ovarian cancer into remission.

The compositional core of the work of having the medicine wheel as a focal point, continues from previous paintings notably FEMME- Women Healing The World where a circle of women linked arms around each other standing on an atlas of the World.

Here the figures appear within a yoga state with out stretched arms interlocked. The hands of the male encircled by the woman represent the 'Live Long & Prosper' iconography from the Star Trek TV series in which Celeste Yarnall guest starred in. The symbolism in relation to her journey through cancer is given profound significance within the artwork as it does in life. The art of wellness upon which Celeste shares in her professional life is most evident in this context.

As part of advanced cancer immunotherapy which Celeste received in Grand Cayman Island in the Caribbean Sea, the depiction of a beach scene that imagined a medicine wheel drawn into the sand offered a poetic reference to the geographic sense of place. Given the amazing sunset vista's created by nature the cloud formations have been shaped to reflect the journey from California where the artist resides. The horizon creates the arc of the physical travel with clouds shaped as the states of California, Florida, Cuba & The Caymans along with the OM shaped cloud emphasis in relation to the yogic figures.

Starfish, which often surface upon the shore represent the four directions of the medicine wheel, which in this work has the seed of life motif embellish the pattern of the wheel within the sand. Foot prints on either side echo the energetic trace of presence left by the figures amplifying the notion of spiritual movements, as a tangible reality and universal metaphor for hope & survival upon the path of life.