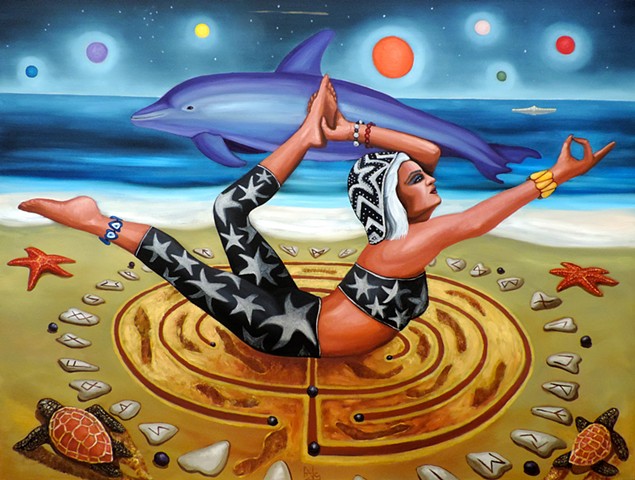 This painting belongs to the Medicine Wheel/Yoga series of pictures inspired by symbolic visual metaphors, juxtaposed to suggest a healing energetic paradigm. The result of visiting Grand Cayman Island in the Caribbean a health hub for the world, that includes advanced cancer immunotherapy at Perseus PCI, received by my wife Celeste Yarnall.

The figure within the circle is the core representational motif of the paintings. Unlike other medicine wheel designs in the series, ‘Celestial LabyRunes’, takes the shape of a three circuit labyrinth drawn in the sand. The footprints allude to the figure having walked the circuit, adding to the meditative nature of labyrinth ritual. Two turtles either side of the circuit create a trail that enhances the notion of the ‘Path’. The pose of extension assumed by the figure parallels the leaping dolphin, in accord with the harmonic arc flowing through the composition.

The pictorial symbolism of the painting attempts to balance the heavenly plane of planetary orbs (chakra’s), with the terrestrial plane of the labyrinth and circle of Runes. The esoteric nature of the image evokes the metaphysical mantra of ‘as above so below’. The runic elements offer a multi-dimensional interpretation aligned to the cosmic dance of the spheres.

A shooting star streaming across the ethereal sky suggests an interplay between the astro- metamorphosis where the shaping shifting dolphin and starfish could be regarded as a conduits exploring the greater ‘oneness’, seen through the fractal prism of myth and shamanic connection to the multi-verse.