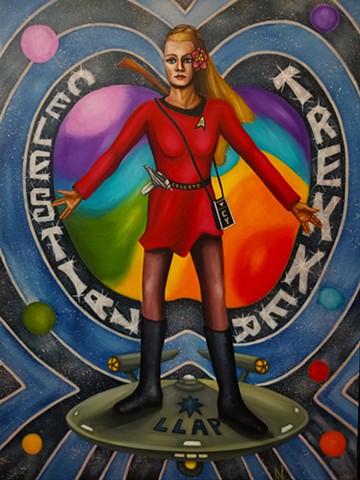 The Beautiful Algonquin Hymn called ‘Song of The Stars’, creates the intonation for this painting that can be seen as a Living Homage to Celeste's Memeory.

“We are the stars which sing We sing with our Light We are the Birds of fire We fly over the sky. Our Light is a voice We make a road for the Spirit to pass over”

My new painting called ‘Celestial Trekker’ being debuted at the annual Star Trek Convention next week as a Memorial to her legacy on the iconic original TV series over 52 years ago, features Celeste’s character Surfing the Celestial Realms upon the vessel LLAP, further suggested by her hand gestures symbolizing the obvious references to Star Trek mythology.

I had begun this painting after we had returned from the Star Trek Convention last year 2018, hoping we that we would bring to this years event together. When Celeste transitioned from this World last October, I had put the painting on hold having to come to terms with the new realities that faced me without her.

Some while back having gone through the upheaval & despair, I was able to resume working on the painting as a kind of Grief therapy. knowing that Art is my salvation and that Celeste would be guiding my efforts with her Divine Goddess illumination.

When encouraged to participate in this years Star Trek convention (STLV!9), after the lovely tribute released by Creation in Celeste’s honor on their website, I felt a duty to show up as her representative in Life and showcase the painting in Loving Memory for all the Star Trek family that have supported us throughout the many years of attending the festival and also during Celeste’s ovarian cancer journey.

She was a Beacon of service in all that she did to help people & pets on the mission to Live Long & Prosper.